Cosplay is a combination of the words "Costume" and "Play". It is a hobby where participants dress as a character and in some situations act like the character they are portraying.

While cosplay usually refers to people dressing up as specific characters (usually from Japanese animated television shows), it can also include original characters, comic book and videogame characters, mascots, costumes of inanimate objects.

Cosplay is generally considered different from renaissance costuming (dressing up in period accurate clothing, usually for renaissance faires), LARPing (live action role playing), and professional costume design (such as creating props or costumes for movies, television and stage) but some people who cosplay may also partake in these activities. 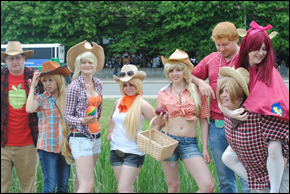 Who Participates and Why?

Anyone can participate, all you need is a costume. It's common to see cosplayers of different ages, races, genders and sizes at one convention although their costume choices may be very different from one another.

The why is different for everyone. Some cosplayers compete in hall contests, skit contests, craftsmanship contests, online voting contests, and some even go on to compete in the World Cosplay Summit. Some cosplay for the hobby aspect, they enjoy having a project to work on and learning new skills. Some participate for the community, making friends and joining photoshoots and meet ups. Some other reasons are attention, love of the character or series, or just because it's something to do! There is no one universal reason to cosplay. 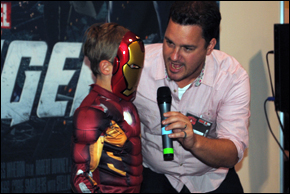 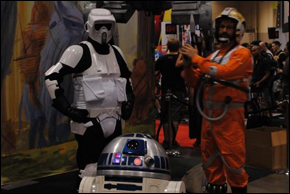 Where Can I Find Cosplayers:

Cosplayers are usually fans of popular culture, and attend conventions featuring the topic they enjoy, because of this you can find specific costume types at conventions that have a specific theme. Star Wars, Star Trek, Dr. Who are the kinds of things you will see at a Science Fiction convention, and Captain America, Iron Man, Superman and Batman costumes are common at Comic Book conventions. There are also conventions that represent multiple genres and may have a collection of various characters.

Conventions encourage costumers to show off their work and often host costume and skit contests (masquerades) and other costuming events.

You won't just find cosplayers at conventions, it has become increasingly popular for cosplay communities to host events, such as picnics, that allows everyone to wear their costume, make friends, and get some great photos. Wearing a costume is only one part of the fun, many cosplayers work with photographers to get professional level photos outside of the convention! So you may also see photographers working with cosplayers in public places such as parks during a photoshoot. 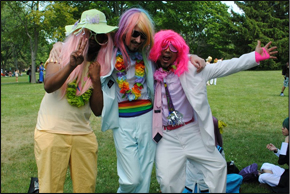 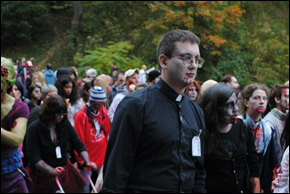 Everyone who cosplays has a different level of investment in the hobby and partakes in different aspects.

Aside from just making the costume, cosplayers also wear their creations and pose for pictures. Wearing a costume involves a lot of work, even after the costume has been made. Many cosplayers use padding, binding, makeup, wigs, contacts and other tricks to heavily change their appearance, and most cosplayers practice poses to use for interesting photographs. Even walking around an event can be tough, making sure that your costume is surviving the crowds and other factors. Good work is rewarded with compliments, photos, and self satisfaction... if not rewards from the competitions! 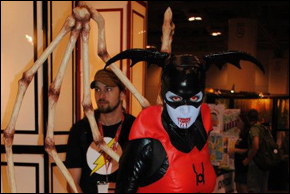 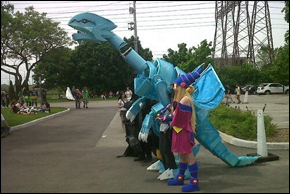 I suggest starting with local conventions, the website animecons.com is a great source for finding events in your area, they list various conventions (not just anime) from around the world. You don't have to cosplay at a convention, nor do you have to attend to see cosplayers since they can be seen in the convention area, and around at food places and hotels. If you are just curious, or have a child who is interested in the hobby and you would like to learn more, just checking out a convention is a great way to learn more. Cosplayers are pretty used to being questioned about the con itself, and are often willing to explain their hobby as long as you don't catch them at a bad time (such as on the way to the bathroom!).

If you want to get a sense of what the community is like on a larger scale you can check out cosplay.com, one of the largest forum sites for cosplayers to discuss their hobby, sell costumes and ask for help. There are great resources on the site itself and you can ask questions you may have and get a variety of responses. A lot of meet ups (like cosplay picnics) are organized or advertised on cosplay.com.

If you are just interested in checking out some pictures of cosplayers, there are a variety of sources such as deviantart.com, cosplay.com, worldcosplay.net, curecos.com, and cosplaylab.com. Cosplayers who have been in the hobby for awhile usually have a website or facebook fanpage where you can see more of their work, and convention photographers often have portfolios with a variety of their work.